Berlin, the capital city of Germany, is not only the largest city in Germany but it is home to the Pariser Platz…only the main focal point square in the center of Berlin! I felt the connection to my ancestors just holding the street sign.

Since the tremendous damage in the years following World War II and the Cold War, Berlin seems to have reconstructed itself nicely after the fall of the Wall in 1989.  It’s now a very cool, laid back charming city.  The food is incredible or maybe we just got lucky and picked some great restaurants…Cookies and Cream, Cantina, Grill Royal, and Bandol Sur Mer.  Artists have been flocking here for more than a decade as are trend setters from all over the world.  The Boros (www.sammlung-boros.de) and Hoffman (www.sammlung-hoffman.de) collections are a must see.  These are 2 private contemporary art collections open to the public on the weekends by appointment only.  Christain Boros shows his collection in a converted bunker built in 1942 that was once a nightclub.  Most of the works were actually installed and staged by the artists themselves and altered to fit in the spaces.

Erica Hoffman shows her collection in a renovated building that unlike the Boros collection changes every summer rotating and/or shifting the works to reveal new relationships and uses a theme to encourage discussion and unification.

Interestingly, they both live on the top floor of their space declaring the art installations as “hobby space”.  These collections offer an alternative to the big museums but don’t miss the magnificent Pergamon if only to check it off the list unless you are an archaeologist!

As luck (if you could call it that) would have it, the Hitler exhibit at the German Historical Museum opened on the very day we arrived!  Hum…a subtle reminder of the atrocities of the Nazi regime and the Holocaust that cast a dark cloud over the city itself which could have had something to do with the continuous days of rain we experienced.  The most visible reminder of German guilt is the Holocaust Memorial spanning an entire city block from east to west near the remains of the Berlin Wall and Checkpoint Charlie. 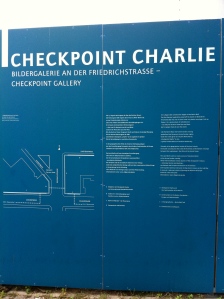 Heard Oktoberfest in Germany is quite the beer and pretzel party but as it turns out, Oktoberfest is actually the last week in September… go figure!  However, we did get to witness the Festival of Lights when all the landmark buildings including our Hotel De Rome is staged with lights.  Evidently, this has become one of the most important international public events in Berlin.  Who knew!  And don’t miss the Berlin Philharmonic.  The acoustics are world renown even with your eyes closed.  Danka Schon.

One thought on “Berlin”