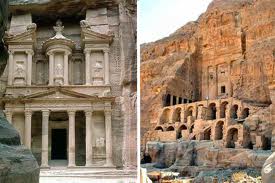 The Middle East is fascinating and well worth a marker on your shortlist of places to go NOW.  Three days here is plenty.  Jordan, a country that borders Saudi Arabia to the east and southeast, Iraq to the northeast, Syria to the north and the West Bank and Israel to the west has incredible history and over half of the country is covered by the Arabian desert.  We started our journey upon landing in Ammon (the capital) in Madaba to see the oldest known map of the Holy Land also in the mosaic floor of the church. Not particularly exciting but lunch in town at this charming restaurant had some of the best Jordanian food.  From there it got better going up to Mount Nebo, one of the holiest sites in the Middle East. 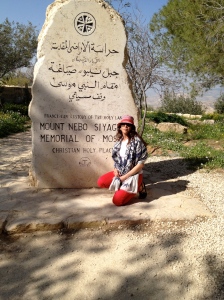 This is where Moses was first given a view of the promised land that God was giving to the Israelites. Evidently, god said ” this is the land I promised on oath to Abraham, Isaac and Jacob but you will only see with your eyes but not cross over into it”.  Hum… it is said that Moses died here and was buried on this mountain by god himself.  However, his final resting place is unknown. Go figure.  On to what we came here for…Petra. 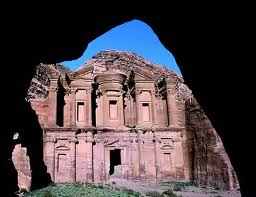 I’ve heard so much about this place and it was as amazing and marvelous as I imagined it to be.  We stayed practically in the UNESCO site at the Movenpick, which was a wonderful considered 5-star hotel . They were as friendly as can be and upgraded us to the presidential suite (they obviously didn’t have anyone else to give it to). I would definitely rank Petra up there with Angkor Wat and Machu Picchu as one of the most memorable monuments I’ve been to. Gotta get to the Pyramids. The Taj Mahal gave me goosebumps although it’s not a ruin but a monument of love.  As we walked down the siq that leads to the city, founded in the 3rd century BC serving as a trading center and home to 30,000 Nabateans, we couldn’t get over the stunning altars and life-size statues carved into the rose-colored boulders. Our guide made us play lots of guessing games with him as we walked through this massive site packed with tour groups on their way to the famous Treasury building that apparently appeared in the opening scene of Raiders of the Lost Ark.  We even hiked up to the Monastery after lunch which was another hour and 1/2 of steps carved into this majestic landscape.  Simply Gorgeous.

From Petra, we broke from the group and hired a driver to take us a couple of hours south towards Aqaba and the dead sea to Wadi Rum also known as the Valley of the Moon.  This famous desert is where Lawrence of Arabia was filmed and T.E. Lawrence based his operations during Arab revolt in 1917. In fact, they named the Seven Pillars of Wisdom

(seen here in picture) in memory of him.   There are lots of Bedouin tribes still living in the area and we stayed in one great one…Bedouin Life.  As far as great goes, we had our own tent with 2 single beds put together to form one made up with fresh linens and blankets.  It was dark when we arrived but the camp was lit up with candles in pathways leading to the dining tent and the bathroom (port-a-potties with sinks and a shower). Dinner consisted of Middle Eastern delicacies like mezzes, hummus, babaghanoush but the real deal was the chicken cooked in the sand totally covered for hours.  We brought our own wine thank god.  They invited lots of guests who were not even staying at the camp so it was very lively and fun. The kids sang and danced for us around the fire.  Actually, my boys would have loved this.  It was a memorable night.  And the next day was just as memorable as we watched the sunrise over yonder 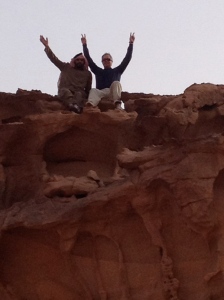 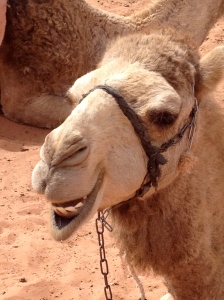 , rode the camels and took a jeep  across the 20 mile long/ 5 mile wide desert filled with sandstone mountains sinuously shaped by centuries of wind. 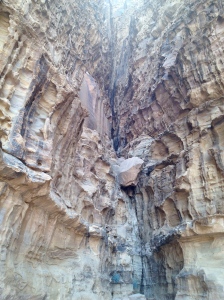 One thought on “The Kingdom of Jordan”